I had a Twizy Technic 80 for 2 years and was mostly happy with it. Used it summer and winter here in Sweden, which was quite an experience. My biggest qualm was the limited distance covered by the battery, roughly 80 km, at best, usually no more than 70. Since my office is 35 km from home, I often found myself forced to stop by an IKEA or McDonalds to charge for an hour on my way home, since there are no outdoor power outlets available where I work.

My idea is to install an extra battery pack to be securely fasten on the rear of the vehicle, using something like this rack. It should carry about 2-3 kWh of charge and would let me connect the Twizy cable to it when I arrive at work. That way I could add an additional 20-30 km to my daily commuting distance. Once home I would simply connect both the Twizy and the battery pack to my outlets and charge both.

I’m not trained or educated in electrical engineering so I don’t know what type of battery packs would be suitable for this, but it would need to be weather-proof, have a standard 220V outlet it and weigh no more than 50 kg/140 lbs. Basically a Tesla Powerwall, but smaller.

Any ideas on how to make this work?

I think it’s good idea. If you need a strong rack, I rather propose my new luggage carrier named "CarGo " that I severely tested 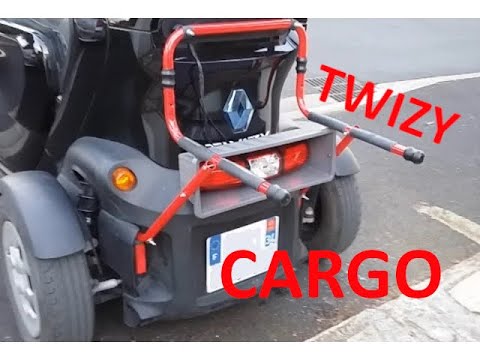 That’s a good option too, thanks.
As far as the battery-pack is concerned, anyone got any ideas or thoughts?

I was thinking, this might be an add-on that Renault could sell. Pay 300€ for an additional 40 km range…
Let’s hope they’re reading this!

This sounds a grate idea in theory. However unless you can direct couple the external battery to the internal one then you will need to use the existing charge circuit and that means converting what ever battery pack you add to 240v. This needs an expensive inverter and a potentially a heavy battery pack if done cheaply using Lead Acid.

Basically you are creating a Jump starter but with a lot of capacity. Might be better/easier with a high spec generator.

The idea of an auxiliary battery pack is appealing, I see the range is one of the greatest limitations for the Twizy.

There’s a number of ways to do what you suggest. The simplest, although not the cheapest, would be to us a pure sinewave UPS inverter charger, like the ones sold by Sterling Power for use in boating applications, and add 12V or preferably 24V of battery storage to this. You could use SLA or AGM batteries, but these are Lead based and would weight a ton…or use Lithium 12V batteries, which are now made with internal electronics to allow them to be charged using any standard lead acid type charger. This would keep the cost down, and would allow the UPS inverter/charger to drain the batteries down to 20% or less, unlike with lead batteries where you don’t want to drain them below around 50%. To add 50% range, you’d therefore need around 3.5kWh of usable battery storage, which isn’t hard to do.

When you arrive at your destination, simply plug your Twizy into the UPS output and enable the inverter. The car will charge until the inverter sees the battery voltage drop to a pre-set level, then will disconnect, ending the charge to the car. The batteries themselves don’t need to be completely waterproofed, but the inverter would need to be protected, while allowing ventilation for cooling, since it would be operating at 2.5kW continuously when charging the Twizy.

I’ll post another way to do this shortly, since most people readng this will be bored by now!!!

Another way to do what you suggest is to use a Tesla Powerwall type unit, which is simply a high voltage battery storage unit, with a charger built-in. There are many such units on the market which would do this job nicely. If you charge a high voltage Lithium pack up, there’s probably no need to use the high voltage to operate an invertyer, since the Twizy’s battery charger won’t run on 230V AC internally, and will almost certainly operat by firstly converting the AC input to DC using a Switched Mode Power Supply. This converts the AC to DC and steps the voltage down to 60V or thereabouts to allow the charging of the internal Lithium battery in the car. There’s no big transformer in the car to do that conversion, like old power supplies used to use.

The nice thing about Switched Mode Power Supplies is that they can happily operate on DC at the input, and don’t require AC form the mains. They can also handle a wide operating voltage range at the input, so in theory, a high voltage battery storage unit could be connected to the input of the Twizy charger directly, as DC and the car wouldn’t know the difference and would charge away nicely until the low voltage cut-off circuit in the external Lithium battery pack cut out to protect the cells in it.

It would be lethal to put a 240V socket on the output of a high voltage DC battery to allow the Twizy plug to be used to connect to the battery, since DC is not designed to be passed through conventional AC sockets and switches (fire and arcing will consume these in seconds). However, if a DC isolator and suitable fusing was added to the output of the high voltage battery unit, the output of this could be connected directly to where the bungee flex connects to in side the Twizy, thus making it safer to operate.

This approach would negate the need for an inverter, and would cost less, in theory.

The only other way I can think of to do what’s being suggested would be to get a hold of a petrol powered “suitcase” generator of 3kW output and use that, but that’s a nasty solution and goes against everything the Twizy owner stands for in my opinion.

That is a big UPS to supply 2200 watts for 1.5 hours or rather a big battery bank. Neater using a UPS as it has the Inverter and charger as one unit. Easy enough to build a battery bank and add a large pure sine wave inverter. Leave the battery charger at home (in this case) and re charge the reserve pack there.

The issue with lead acid batteries is the rate of discharge, to stay say with in C20 rating you would be looking at around 23 batteries (size dependant). This is why Lithium is used as they can stand the higher discharge rate and weigh a lot less. Ask @peter_szczesiak how big his Boat Battery bank is that he can use to charge the Twizy (fully). Lead Acid batteries would need a trailer.

I have a 1500 AH full traction battery bank supplied with 1 kw of solar I charge my twizy on sunny days when I have over 50 amps going into the bank from the sun. This protects the batteries to an extent as it uses the solar first before drawing from the batteries

Would one of those simple self-contained Honda briefcase generators not be an option? I know the small ones only push out about 1kW, but would this be enough to charge a Twizy, albeit slowly? There’s a 2kW version that’s slightly bigger, but both would easily sit on the back seat until you get to work and could run very quietly in the background when you need it.

I’d love to be able to tweak the BMS so that the genny might be able to be sat running on the back seat, as a range extender, but I guess that’s not going to work with my levels of electronic knowledge!

I don’t think it would work. The Twizy would try to draw 10amp bring the voltage right down below where the Twizy would charge. Either that or the inverter would pop.

Hmm, so perhaps the 2kW version as a minimum then. Might still be useful to have for those longer adventures…! Thanks for the insight however.

Simplest option is still to have a high voltage DC Lithium bank and use this without an inverter. You’d need to know what you’re doing though as high voltage DC is nasty!!