Some of you may know Chris Harris , he is a very famous road tester . Here is his review of the Twizy. 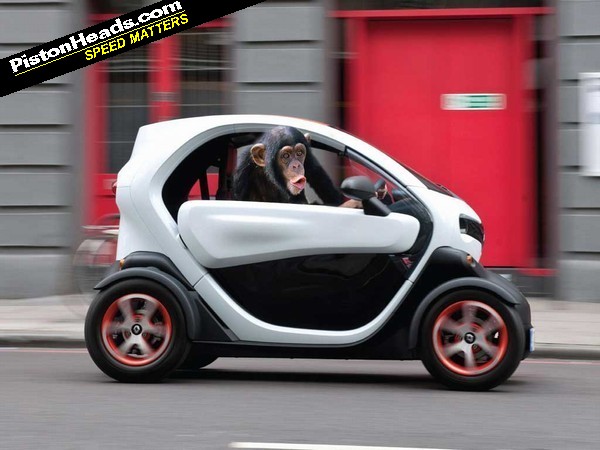 Chris Harris goes electric. And doorless. In the middle of winter.

I saw this. Didnt necessarily agree with all of it I have to say.

No, but Chris is probably one of the biggest petrol heads in the country.
A fuel strike and shortages would work wonders for the electric cars.

I think he’s got it spot on, it is one of the better reports I have read.

One point though is that in rural areas you can plug the Twizy in more easily; its only a 3 pin plug-the problem occurs not with finding a plug socket, but finding a dedicated EV charge point. In rural areas, you just plug in where you can-at the pub, at the farm, at mates and so on-it is in the city where the cable crossing pavements or being tampered with is the problem.

A perfect fifth car-he’s dead right; the Twizy is peerless for certain tasks. We have the choice of at least three vehicles on any one day, sometimes 6 or 7 but the Twizy is best vehicle for many trips; to the doctors where there is no parking but a half space that it fits into; to the town where the diagonal parking bays leave a small triangle at each end which only a Twizy will fit into; for doing quotes for my business and getting people chatting; for going to the hospital when parking costs £9 but nothing when I squeeze the Twizy into my secret spot; for fun and enjoyment at low speeds; for going around town and being able to chat to random people due to the open sides, for stealth manouevres-we crept up on a deer and got within 8 feet in the woods; for cheap/no guilt trips to friends when money is tight etc etc.

In London as a main car if you have a garage and use public transport too it makes perfect sense, but it is never going to be the ideal main or only car for most people.

Renault has a strong history of thinking outside the box and introducing cars that are too revolutionary and do not sell; the Avantime and Vel Satis come to mind-and fair play to them for launching the Twizy. The daft thing is that the Twizy would sell well if handled and placed properly-with the proviso that Renault can shake off their dowdy image by being all new ZE sellers with full back up. But no; a good idea let down by some poor testing (hazard lights, throttle and brake recalls etc), dreadful marketing (scooter culture brochures, doing roadshows in ice cold weather with doorless Twizys) and in my experience, very poor dealers (I’ll leave it there!).

It is not the Twizy’s fault-it is Renaults. They need to sort the problems on the cars with a proper recall, during which the customer could be cosied up to and given ZOE launch tickets or similar and given a Fluence or Kangoo ZE as a courtesy car. They then need to sort UK operations by employing a staff member to see what owners think and how to improve the Renault experience (going on the forum would be a start). Then they need to do some decent product placement and come up with a decent UK special edition for UK tastes.

God alone know why no-one at Renault hasn’t come up with the idea of a specific doorless Royal Mail delivery model with no rear seat and space for post/parcels-they would sell thousands. Our local postmen think it is a brilliant idea as they use Combos/Kangoos/Doblos etc which could easily be replaced with a Twizy truck-not having doors is a major advantage to stop start town work.

He right in few areas but wrong in others.At one time in the Ca where i was living for my work i was paying just over $5.00 a gallon for unleaded to put into my vehicle .Compared what you guys pay over there that not alot for a gallon of gas .

That’s the best ever synopsis of Renault, marketing, after-care and entire strategy for the Twizy. And two years later, has it got any better? Nope.

Well done Mender. When are you joining the EV section of Renault?

I keep an eye out for a desperate seller with a doored Twizy, or a non-uk one with no battery hire but every time I have seen one I’ve just bought something else…

Now driving a lovely 06 Perodua Kelisa and new Suzuki Celerio, plus whatever is in my sales stock

If only the Twizy was launched and sold by Apple or someone with similar marketing nous and product back-up, they’d be everywhere. Things don’t have to be perfect to be popular…!

Totally agree. Can you imagine if Apple launched the Twizy. What a different prospect that would have been. Made me pause and think too.

It will be interesting when the 4 year warranty / PCP’s come to an end this year and how many get offered on to the market. I think people will practically want to give them away or hopefully we can all pull together and get Renault to see sense and let us buy the batteries for a realistic figure. I won’t be holding my breath though.

Hey Martin, do Twizys really age all that much? I mean, I got a 2012 model, the wear and tear is minimal, the normal maintenance items are at a bare minimum (tyres, brakes, 12V battery, wiper…) - I am not sure that people will feel a need to jump at the end of warranty when the service and maintenance that drive reliability is so low? I for one don’t care for a warranty on a Twizy - the big expensive item is warrantied by Renault: traction battery, relay… Etc. and you pay for that service. So the replacement business model may be different here compared to the petrol vehicles where mileage does age the car in its engine, power train, seals and gaskets, belts, etc. While it is habit forming, I believe that the current clientele of the Twizy on average seems much more in tune with their needs and purpose of the vehicle, than the average petrol/diesel consumer. If your usage fits the purpose, and you are happy with it, you will stick with it. If you have life changing situations, the Twizy may not adapt easily. Just some thoughts on supply and demand

As Crazy says, there’s not much to wear out and there are a few appearing in salvage yards to harvest for bits, too.

Hopefully some non-OE manufacturers will start producing parts for the Twizy which will make parts prices cheaper and with the infrastructure ever improving the prospects long term are good as the Twizy will be replaced over the years (maybe by Honda or Gordon Murray not Renault) and they will become cult classics.
By then you will be able to ditch the what will be old tech battery and stick in a new tech plant economically.

I don’t think Renault will do anything spectacular, but you never know…

The way to look at a Twizy is lifelong ownership and after the teething, it will get better as parts supply improves/cheapens, more tech specialists start to work on the tech bits and better batteries become available without hire costs. As a nearly new 30 mile doorless comes in under 4k, it’s a cheap hobby and form of transport long term and price will firm in the future.

Actually, doorless come on to the market at well under 3k. Mine had just 2200 miles on it, had doors and “Colour” spec from a Renault dealer with a years extra warranty after the 4 years one expires in July for just £2700. Added new Twizy alloys, (I hate plastic hub caps!), to it for £300 and I’ve got a pretty well immaculate one for just over £3k. We won’t mention the money I’ve spent tarting it up since however…