I received an Email today from Lov IOU (the French Twizy Company)
They have released a new product.

We market starting today photovoltaic kit for the Renault 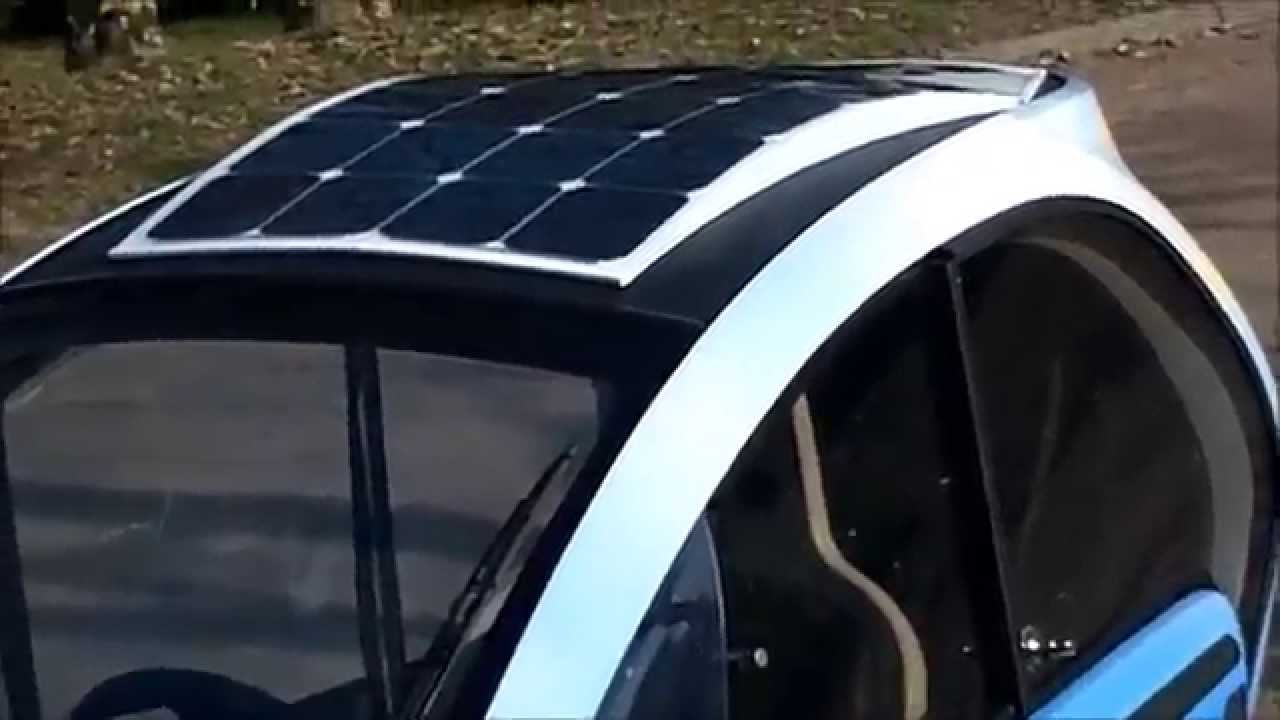 Its a pity it doesn’t charge the traction battery.

JmayoIts a pity it doesn’t charge the traction battery.

You could charge it if the solar roof was 30 foot square, it might upset the aerodynamics a bit! :lol:

Well yes its a step in the right direction but I calculate that it would take 4 weeks of substantial sunshine to recharge the traction battery for a 50 mile trip. Probably not the conditions that would require a heater or an interior light. But I welcome any innovation that makes the Twizy more eco friendly since we have little alternative in the near future.

Well yes its a step in the right direction but I calculate that it would take 4 weeks of substantial sunshine to recharge the traction battery for a 50 mile trip. Probably not the conditions that would require a heater or an interior light. But I welcome any innovation that makes the Twizy more eco friendly since we have little alternative in the near future.

My solar panels produce a little under 10kWh a day on average over the year. They are grid-connected but they could charge a battery bank. With a suitable (and expensive) inverter, that would provide enough power for 60 - 80 miles a day, which is way more than I need. But they do cover the roof of the house!

does anyone know how I can get one of these solar roofs? Ive email them but no responds. I would like the locking windows too

does anyone know how I can get one of these solar roofs? Ive email them but no responds. I would like the locking windows too

This french company is definitively closed…

I made some maths on my side and calculated that solar panels could only supply some accessories but absolutely not the main battery.
Ford is making some noise recently with a solar energised car, but I think it is just an ad.

Why not a solar energy powered Twizy ?

The American automaker Ford presents a prototype of solar-electric car that is to say, able to recharge batteries with embedded photovoltaic...

The Ford C-Max Solar Energi Concept uses a solar panel on the roof which is said to act like a magnifying glass. Ford claims it takes a day’s sunlight to deliver the same performance as the standard C-Max Energi PHEV.
The car’s solar panels have been supplied by Ford’s solar technology partner, SunPower, with the Fresnel-type ‘concentrator’ lens developed by the Georgia Institute of Technology. The Fresnel lens, which features concentric arrangements of tiny prisms to track the sun’s rays, acts like a thin magnifying glass.
Ford says eight kilowatts can be generated through the system, equal to a four-hour battery charge.
The C-Max Solar Energi is estimated to reduced the standard Energi’s annual emissions by around four tonnes for a typical owner. A range of 620 miles, with a 21-mile EV-only range, is possible and the car retains the ability to plug in to an electrical socket.
Research by Ford says the sun could power up to 75 per cent of all trips made by the average driver in a solar electric vehicle, and suggests the technology could be particularly viable in areas with underdeveloped or unreliable electricity infrastructure.
Ford’s electrification boss Mike Tinskey said: “Ford C-MAX Solar Energi Concept shines a new light on electric transportation and renewable energy. As an innovation leader, we want to further the public dialogue about the art of the possible in moving the world towards a cleaner future.”
The car will be shown at the Consumer Electronics Show in Las Vegas, after which it will undergo testing to determine feasibility for a production model.

If it is not an ad, it is an error !
If you consider the nex recharging station they imagine to concentrate more solar energy on the panels using Fresnel lenses, you must think what a strange idea ! If you want to use it, first it must be during the day, second, it must be for a long time because it is slow charge, third it must be with a compatible car because the car has to be able to slowy follow the movement of the sun !
This apart, I have other thinkings in my article that lead me to say that it is not realistic : efficiency, price.

There are a few considerations to be accounted for. There is an error in that it states 8kw. There is no way that a car roof even with lenses and perfect sun can produce 8kw. What it means that in a day it will generate 8KW hours (a full Twizy charge). That in it’s self is impressive. basically it is producing 1kw an hour for 8 hours. Usually a 1kw solar panel would be a lot lot larger. The 8KWH is a theoretical value in ideal conditions and no shading. A bit like the Twizy doing 60 miles on a charge.

To understand this look at solar panels on house roofs, most systems are for 4KW of solar panels. These in theory could produce 32kwh (8 hours of perfect sun and no losses) they never do in the UK even when we get more than 8 hours of over head sun. So for the Ford to generate 1kw it would need an area the quarter the size of a house roof system. A bit smaller due to the lenses, however if the lenses heat the panels up they will become less efficient! So how big is this? 1 panel is generally around 250w so we need 4. Each panel is Approx 2m x 1m ( depends on efficiency, maker etc) but it means you need 8m squared. Big roof and a lot of weight…

Also the power is used to assist, not run the car. Taking any load of the ICE engine, even topping up the 12V system makes the car more efficient. So running the air con and Stereo off a battery rather than the engine is good. Ford are making a start in the right direction and they have at least left the ability to re-charge the car from a Electric point rather than just the engine or Sun.

This french company is definitively closed…

That means that my Locking Windows that I bought from them are unique!

The Ford C-Max Solar Energi Concept, unveiled at the International CES technology expo in Las Vegas this week, is based on the plug-in hybrid version of the Blue Oval’s medium-sized people carrier currently on sale in the US.
The roof features a 1.5-square-metre array of 275W photovoltaic cells supplied by Ford’s solar technology partner, SunPower.
To recharge, the car sits under a canopy of approximately 15-20 square metres in size – slightly larger than the average parking space. It acts as a Fresnel lens, concentrating more of the sun’s rays onto the Ford’s solar panels.
Ford says the car uses existing autonomous driving technologies, such as the auto-park function that is already a feature of the C-Max, to move a few metres during the day to track the sun’s movement through the sky.
Using this method, Ford says the C-Max’s lithium-ion batteries can be recharged in about eight hours, based on the average amount of sunlight received by US cities.
Besides the roof-mounted solar array, the concept has not required significant mechanical tweaking from the existing C-Max PHEV. The solar array weighs about 2kg in total, so do not add significant weight to the vehicle.
David McCreadie, Ford Manager of Electric Vehicle Infrastructure and Smart Grid, explained that the software controlling the lithium-ion battery management might need to be reconfigured to optimise recharging. Ford’s boffins will delve more deeply into the technology later this year.
“Ford has not come out and said ‘we’re going to turn this into a production vehicle’, but after CES has ended we’re going to start a testing phase to look at some of the finer details that we’re still working on. We’re moving in the direction of getting this to be fully viable.
“We’re really excited about it because it is essentially taking a car off the grid entirely. Our data suggests to 75 per cent of journeys could be undertaken using energy sourced from solar. That’s the percentage of journeys that our current plug-in hybrid customers are undertaking in electric mode.”
McCreadie said it was too early to consider the cost of a production version of the solar-powered C-Max and the Fresnel lens canopy, but he believed the vehicle could provide an attractive financial benefit.
“If you were to plug your car into the mains electricity supply during daytime hours instead of using the sun, you’d end up paying between one and three dollars per day to do that. You could avoid spending that by charging using the sun, and you can start to envisage a value proposition where it is worth maybe $500 per year in electricity costs.”
McCreadie explained how several factors had combined to make it feasible to explore solar energy as a potential power source at this point in time.
“The first factor is the ongoing proliferation of electric vehicles on our roads, specifically the storage batteries which those vehicles have on them, because storage is essential for solar energy to be working at its optimum.
“The second factor is that the price of solar panels has started to come down, which is making it viable to take them off the roofs of homes and put them on the roofs of cars.
“The third aspect is the technology we have on our cars which enable it to autonomously move and therefore reposition itself to always keep the sun on the roof,” he said.

Okay while everyone is laughing at Solar cars then look at this - Wind Powered cars -Gizmodo.

Someone needs a physics lesson.

[FONT=Arial]Back to the Ford. Found this on Transport Evolved web site ran by [URL=“http://transportevolved.com/author/nikki/”]NIKKI GORDON-BLOOMFIELD who was an active member here for a while.[/FONT]

I was reading that the solar panels on the Ford would be used primarily for powering things in the car, not for actual range extension as that’s not viable at the moment.

Then again the fact that Ford are interested in doing this can only lead to more investment and research into improving solar panel efficiency which is a good thing. Everything has to start somewhere.

I received an Email today from Lov IOU (the French Twizy Company)
They have released a new product.

To say that that French solar roof is: aesthetically pleasing takes some courage…
Anyways what if it’s connected to the Twizy inverter? Eventually will charge like 2-3miles in 2-3hrs?..possible???

Rather than adding weight with an extra battery as for the French kit better straight to the traction battery init!

That french thing isn’t looking good at all. A properly built and cut to size would definitely be better, but that needs to be factory made.