I set out to resolve a rattle from the overhead speaker area but ended up upgrading the speakers whilst in there. I took plenty of photos and thought I’d do a write up, which may help others.

To access the speakers there are two T15 torx screws to remove, which can easily be seen when sitting in the back seat.

013840×2160 2.46 MB
With both screws removed the speaker cover is removed by pulling it down firmly. In this picture you can see the location of the clips.

033840×2160 1.65 MB
To extract the speaker, removed all four screw and unplug the electrical connector by squeezing the catch and pulling.

083840×2160 1.87 MB
Unfortunately, although the original speakers are round and four inches in size the four mounting screws are not in a square (the hole centres on one side are ~81mm and ~93mm on the other).

I thought it unlikely to find some speakers, which were a direct fit so settled on a set of Pioneer speakers from Halfords. There was 20% off at the time so they cost me just £16.

093840×2160 2.04 MB
After offering the new speakers up to the original brackets it became apparent new mounting holes would be required. To do this its easier to removed the speaker bracket, which is held in position with three T15 torx screws (note one of them is different).

053840×2160 1.54 MB
Once extracted, remove the existing threaded screw clips before offering the new speaker up to the bracket, marking and drilling four new holes to suit and reusing the threaded clips.

102160×3840 2.15 MB
To avoid any vibration I’d recommend carefully peeling the foam from the original speaker and fitting it between the new speaker and bracket before fixing it in place with the original screws.

113840×2160 1.61 MB
Now for the electrical connection. I did a bit of research and found that when dealing with speakers the larger speaker terminal is usually positive and the wire with the stripe is usually negative. Also if you connect a 1.5 battery across the speaker terminals correctly the cone should move outwards. Based on this information I established the terminal closest to the clip of the Twizy’s connector is positive.

To avoid any confusion with this and to make things simpler you can buy a pair of adapter leads online for around £2.50. I was too impatient to wait so opted to cut the original connectors off then connect the leads supplied with the speaker using solder and heat shrink.

123840×2160 1.74 MB
With the connection made I’d recommend wrapping the cables with fabric tape, to protect them from damage and avoid rattles.

133840×2160 1.96 MB
With this done fasten the speaker and bracket back into position using the original screws.

143840×2160 2.78 MB
Once both speakers are in place clip the cover back into position and refit the two screws. I applied some self adhesive padding to strategic locations to prevent rattles (my original issue).

153840×2160 1.46 MB
I was happy with the end result. There’s not much change in terms of bass but everything else now has much better clarity. Also, the original rattle is now gone.

Nice how to post, cheers for sharing.
I did a similar process in a video when I added the speakers and bluetooth gear from scratch and 3D printed myself some speaker brackets. 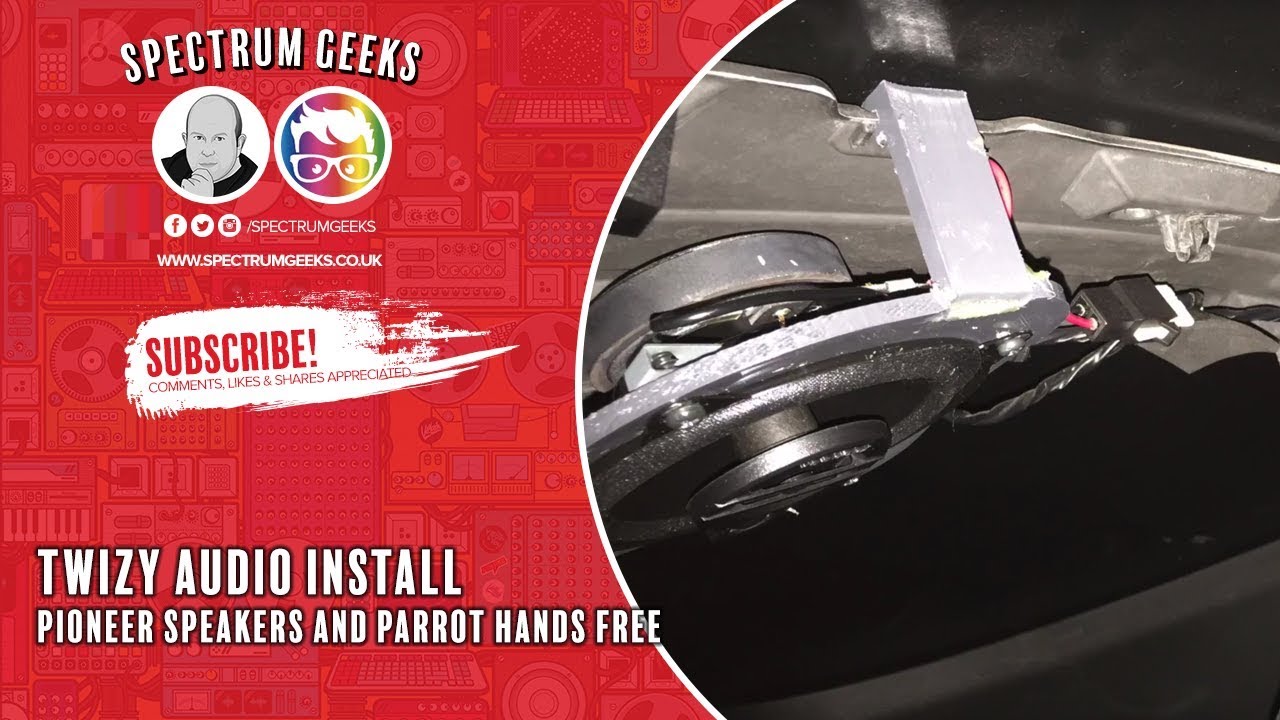 I watched several of your videos prior to buying my Twizy.

hi Peter, nice tutorial. Was just wondering, did you phase check them? I followed a similar process and stuck with the stock wiring instructions only to find out that after hooking them up one of the speakers was out of phase so I had to invert the wiring on that one. There’s great apps for your phone out there to check the polarity on your speakers such as speaker pop.

I used a battery to make sure they were wired the correct way round.

I fell foul of that years ago. When you get it wrong they sound terrible!

Actually you shouldn’t be able to hear the difference if they are BOTH wrong polarity. But if one speaker is different it will sound horrible…

True, speakers do not care about the polarity of the connection. On that same note, neither do your ears. The positive and negative terminals are only there as a reference so you can connect multiple speakers in the same polarity. The problem in my case was that the stock wiring of the Twizy led me to misconfigure one of the speakers, thereby out-phasing them causing all the obvious negative sound cancellation effects.

Obviously I didn’t test it when soldering the speakers terminals and had to reopen up the housing and invert the wiring on one of the speakers… So be advised, when doing this, please do check the phasing before soldering the connections.

Twizy passed its MOT today, really need to use it more and do more videos.

speakers do not care about the polarity of the connection

Not quite true. With switched polarity you make membranes to travel in wrong way. There are permanent magnets with permanent polarity on the speakers and there you have coil winding on the membrane…just like in the electric mootor - stator and rotor… if you switch the polarity the motor will run in the opposite direction. With the polarity on speakers you tell them in which way the membranes should travel.

you can see that here

You can’t compare a DC electrical motor (or electrical signal as shown in the video) to the AC signal that goes to a speaker. Speakers are designed to create sound waves and they do so by a cone moving back and forth from their neutral position. Therefore, on a one speaker setup the polarity doesn’t matter because the sound wave is the same if the cone first moves back and then forward or vice-versa. If you don’t believe me test it for yourself on a one speaker setup, I’ll garantee you that you won’t hear any differences because that’s how our ears work. It does become a problem when you have multiple speakers because the out of phase speakers partially cancel the sound produced by each other.

Sorry, but here we are deep on the oposite sides of the ocean. I’ve done that, long time ago, fucked up some realy good speakers (broken membrane edges) when playing realy loud. Just look for the slo-mo videos with speakers membranes on YT and watch how much they travel in each way. The oposite directon moves are only a rebound, beacouse there in DC circuit it’s only one way curent, never in both ways, like in AC circuit

And yes, here are you right, when listening not to loud (regular user) you’ll never notice the difference. But in peak situations you’ll notice that.

Sorry to hear about your speakers. You do know that speakers operate on AC right? They always move back and forth

Did some reading this morning as my knowledge on the subject isn’t academical and came to the conclusion that inverting polarity on a speaker will not be able to damage a speaker in any way. For those that are interested in a more detailed description:

There are experts that claim that inverting absolute phase (absolute polarity) sightly compromises the sound stage but it will be difficult to hear and manage for a number of reasons. The first of which is that some preamps invert polarity, but the biggest trouble is that recording studios don’t normally keep track of polarity, and some studio gear inverts it. Thus some recordings are correct, and others have inverted polarity. It is said that on multitracked recordings, the absolute polarity may even differ from track to track.

My two cents? Do your best on your side of the spectrum with a speaker pop test to determine the system polarity (preamps and amps included) and make sure that no speakers are out of phase because that’s an entirely different subject. There are some hearing tricks you can apply to get the absolute polarity right:
https://www.gcaudio.com/tips-tricks/absolute-polarity-a-prerequisite-to-optimum-performance/